Our trip to North Brewing Co’s brewery was the start of our journey into Leeds after we had stopped off and paid a visit to the Horsforth Brewery. We were like machines that Saturday and we were determined to call in at as many places as we could, whilst getting our daily steps in along the way! With a limited amount of time to drop in everywhere, we decided we would go to the brewery direct rather than visiting the tap room. This was decided after some careful research whilst on the train as to what beers they had on at both. Fail to prepare and prepare to fail and all that…

So after walking from one side of town to the other like a pair of mad men on a mission, we arrived to a relatively quiet but friendly atmosphere. I was surprised when I saw the scale of their operation as I was expecting it to be larger, but there is plenty of room for fans to come and have a drink or two. I don’t know what it is, but there is something oddly satisfying about seeing the vessels in all their glory whilst you sit and enjoy the fruits of their labour.

Thankfully it wasn’t too cold when we had called in as the brewery is open at the front but should it get draughty there are heaters inside with blankets also available. I did feel, however, that come the summer the brewery would really come into its own with the front open and allowing the sun/warmth inside. Despite being smaller than I expected, the selection of beers was plentiful and it was a shame we were only stopping off for a couple in the end. 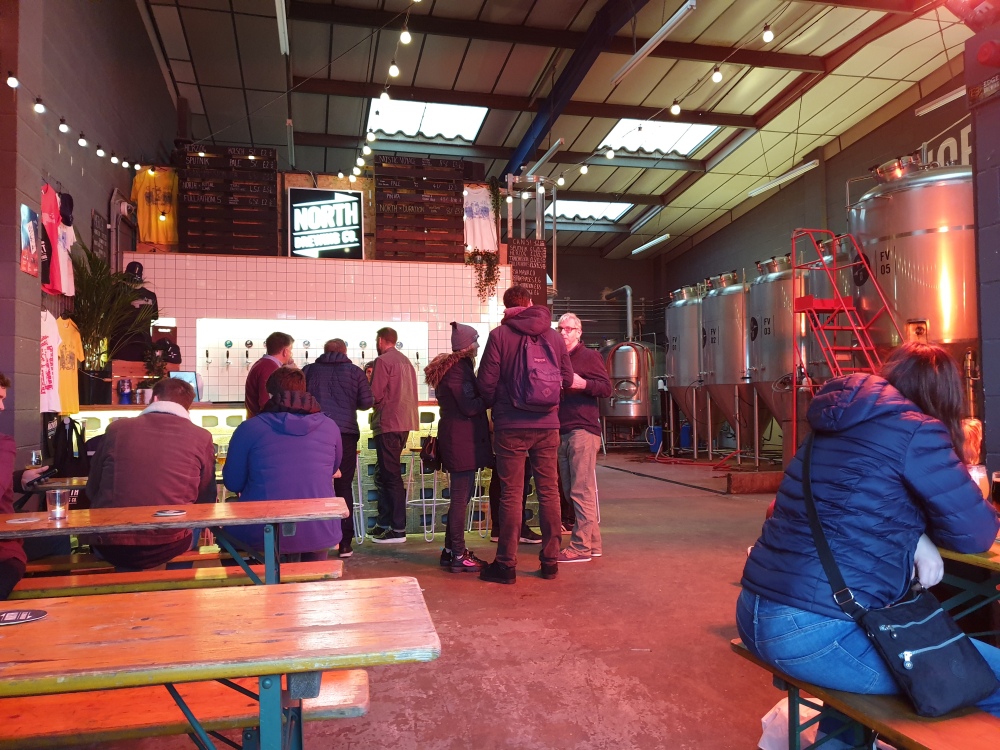 After a short deliberation at the bar we chose our brews respectively and took a seat on one of the bench seats, admiring both the brewery and what they could achieve from the set up they have. To start with, I went low and ordered their Citra & El Dorado Pale with Andy going for the big guns straight away and getting their West Coast DIPA collab with Duration Brewing. This was my second beer of the visit but, as we still had places to visit, I thought I would try and pace myself before hitting the high ABV stuff.

Both beers were very nice in their own right but, as we are both huge fans of the style, agreed that the West Coast was a real treat giving those bitter-sweet tastes you would expect. What I loved about this outing and others before it, is that they really disguise how strong they are which could be quite dangerous should you be having more than one, as you could easily session it.

Mid-stop the munchies struck and, luckily for us, they had some Serious Pig snacks on offer which is always nice to see. A bar/brewery should never be without a good offering of bar snacks! I can testify that the cheese snacks are very good and, as you may well expect, very cheesy! During our visit, Brewtown Tours stopped in on one of their guided trips which was good to see but made me want to come and go on one of North Brewing’s own in the near future. Learning more about their set up and processes would be very interesting, allowing you to appreciate the beer a little bit more.

With our second round complete, sadly our trip was over and it was time for us to move on. Our next venue? North bar as, again, we had scouted their tap list on the train and they had Wylam and Verdant on but more of that to come in my next piece. Thank you to North Brewing for having us and their excellent beers, we will undoubtedly be back again in the summer! We recommend anyone comes to visit them as the walk out of town is well worth it.